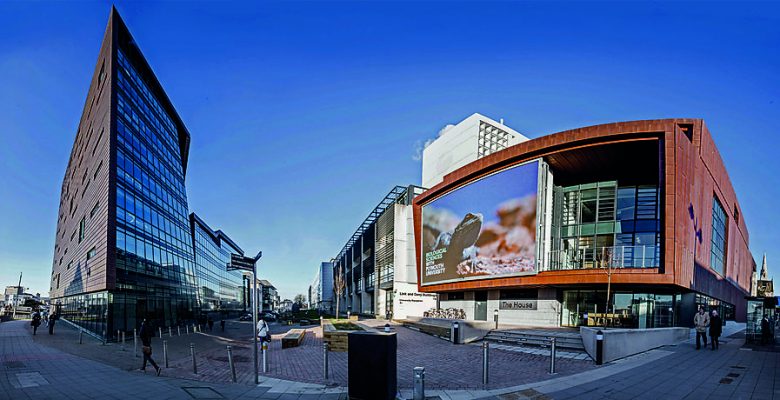 The University of Plymouth has received the Queen’s Anniversary Prize for Higher and Further Education at Buckingham Palace today (Thursday) for its pioneering research on microplastics pollution in the oceans and its impact on the environment and changing behaviour.

The honour, the highest that can be bestowed upon a higher education institution, recognises nearly two decades of world-leading enquiry by Plymouth researchers, led by Professor Richard Thompson OBE, which has resulted in repeated scientific breakthroughs and influenced national and international legislation.

Professor Judith Petts CBE, Vice-Chancellor, received the prize from HRH The Prince of Wales and HRH The Duchess of Cornwall at the ceremony in London, this morning, accompanied by Professor Thompson. This was followed by a special reception at which the University was represented by a wider delegation of staff and students as well as the University’s Chancellor, The Lord Jonathan Kestenbaum.

It is the third time that the University has been honoured with a Queen’s Anniversary Prize, which celebrate excellence, innovation and public benefit. The last occasion was in 2012 when the University was recognised for the breadth and excellence of its marine and maritime research, teaching and training.

“Receiving the Queen’s Anniversary Prize on behalf of the University was a huge honour and recognises the pioneering role that our institution has played in not only defining a global environmental issue, but working to find solutions to it. Challenges on this scale require a coordinated response at a societal level, and what really sets the institution apart is its willingness to engage with all parties in a bid to stimulate change. Richard Thompson and his team’s work in microplastics, indeed defining the very problem itself, is part of the University’s wider and globally renowned marine and maritime research, which, through a wide range of disciplines, addresses some of the world’s most pressing issues.”

It was in 2004 that the University first described the presence of microplastics in the marine environment, when in a seminal paper published in the journal Science, Professor Richard Thompson and his team showed that there had been rising levels of microscopic plastic debris evident in the plankton record since the 1960s. The paper, Lost at Sea: Where is all the Plastic? was the first to answer the question as to why despite exponential increases in the quantity of plastic waste generated, monitoring data from the environment did not show a clear increase in plastic debris.

The paper attracted global media coverage, and inspired a new field of scientific enquiry, with Professor Thompson and his team at the very forefront as they followed up with a remarkable series of fundamental research papers. These included: being the first to show the global distribution of microplastics, including in the Arctic and the deep ocean; their ingestion by fish and other marine life; the role that textiles and wastewater play in their source and transmission – with a single wash of clothing releasing more than 700,000 microfibers; and how some facial scrubs could contain up to 2.8 million microbeads.

The University’s interdisciplinary International Marine Litter Research Unit also considers public attitudes and behavioural aspects in relation to plastic and the marine environment. This has been backed by a commitment to engaging with industry bodies and government that has included presenting scientific evidence at the United Nations, G7 and EU levels. As a result, the University has influenced new legislation in the UK, Europe and Canada, including the ban on microbeads in cosmetics.

Professor Thompson, who was himself recognised with an OBE for his services to marine science in 2018, said:

“The work we have done at the University has played a major role in raising awareness of the topic, acting as a tipping point for the academic community, as well as for industry, policy and the general public. Many people, past and present at the University, nationally and internationally, have made an invaluable contribution to the work we have done over nearly 20 years, and the Queen’s Anniversary Prize is reward for our endeavours, achievements and commitment.”